So to kick off here's some important Heidi News that I really should have passed on a lot sooner...

February 2021: Release of my 32nd Harlequin/Mills and Boon novel! Yay.

Innocent's Desert Wedding Contract is the third story in my on-going series The Khans: Desert Princes of Passion series, this time featuring Raif and Zane's distant cousin Karim - the crown prince of Zafar - and desperate Irish stud owner Orla Calhoun... There's a fake engagement, a wedding of convenience, lots of drama and passion and some hot desert nights in this one to enjoy. If you love linked books and you want to catch up with the heroes and heroines of my previous two books in the series - Carrying the Sheikh's Baby and Claimed for the Desert Prince's Heir – they also put in cameo appearances in this book with their growing families!

Just Like in the Movies is the tale of a broken down cinema in Notting Hill and the two people that inherit it after the death of owner Matty Devlin... His best friend and surrogate daughter, cinema manager Ruby Graham – who loves the movies – and the nephew he's never met, Manhattan property billionaire Luke Devlin – who hates them.... Themed around some of my favourite films, the book deals with grief, the families you are born with and the ones you create for yourself, a sprinkling of London community spirit and a great big dose of humour, movie realness and an enemies-to-lovers romance straight out of a Hollywood rom-com...

April 2021: A UK Kindle Monthly deal for Claimed for the Desert Prince's Heir 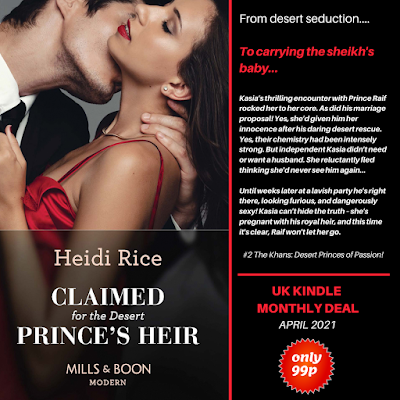 Lasting the whole of April this is a bargain for readers in the UK who want to pick up the second book in The Khans, my Mills and Boon Modern series (see details above!), on Kindle for the ludicrous price of 99p!

In the months ahead I have the following releases in the schedule that I'm so excited about:

July 2021: Release of my 33rd Harlequin Presents/Mills & Boon Modern, One Wild Night with Her Enemy! 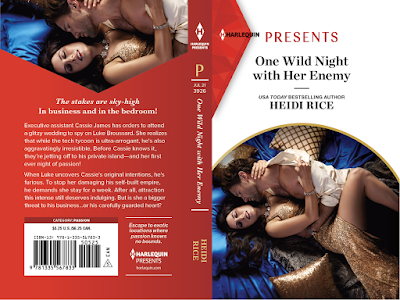 The story of a cyncial US tech billionaire and the innocent British executive assistant sent to spy on him - who ends up spending one wild night (and then several more) trapped on his private island off the coast of Oregon. The story is the first in my duet - Hot Summer Nights with a Billionaire - which I have written with my best writing buddy Abby Green. It features two BFFs, two uber hot billionaires, and lots of hot nights in London, San Francisco, the beautiful British countryside and America's wild and wonderful West Coast! Abby's book The Flaw in His Red-Hot Revenge will be out in August.

The Billionaire's Proposition in Paris is the first in a new two-book series - The Secrets of Billionaire Siblings - featuring the Irish O'Riordans and British De Courtney families. The first book has self-made Irish billionaire Conall O'Riordan hiring widowed event planner Katie Hamilton to plan his sister Imelda's wedding as his castle on the West Coast of Ireland... But what Katie doesn't know is that Conall has hired her to get information on her estranged half-brother - British logistics billionaire Ross De Courtney... Because Ross just happens to be the father of his other sister Carmel's secret child! There's passion and drama aplenty, not to mention a stunning night at a Ball in the City of Lights as this pair navigate the devastating secret that has, Conall believes, destroyed his sister's life, even if he adores his now 3-year-old nephew Cormac. And Katie is about to discover has the potential to devastate her life too...

For 2022 and beyond: At the moment I'm hard at work on the second book in my The Secrets of Billionaire Siblings duet - this is Ross and Carmel's story! 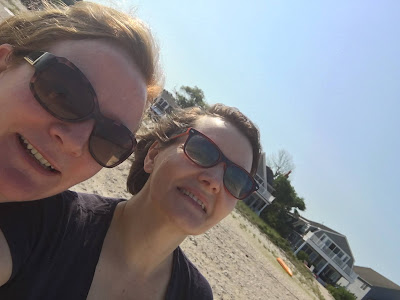 Full of all the secret baby drama you would expect - but I'm throwing in a great showdown at Conall and Katie's wedding to kick it off, a few hot nights at a loft apartment in TriBeCa and some more on Ross's private estate in Long Island... Inspired by my trip there in 2019 with the fabulous Abby Green... Need I say more...

And in the works I have plans to do another story in my The Khans: Desert Princes of Passion series, this time featuring Karim's half-brother Dane – a New York nightclub entrepeneur who has to spend a month deputising for Karim as the Sheikh of Zafar during an important diplomatic mission in the region... His heroine is the chief palace aide - Jamilla - who is going to have to persuade him to toe the line when it comes to royal etiquette while keeping her heart in tact... Not an easy feat when it comes to my seductive rebel desert prince!

I'm also working on a new pitch for One More Chapter, for a longer book, featuring two older characters, now in their forties... If I have the time that is - because I've just signed a new 6-book deal with Harlequin/Mills and Boon!!

Happy reading, and have a wonderful Easter. xx