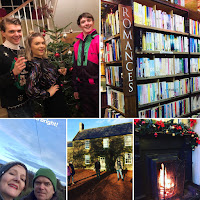 Happy New Year everyone, hope you all had a fab Christmas. I spent the week in gorgeous Northumberland, drinking prosecco, celebrating an 80s Wham Christmas (as well as the real thing), watching The Greatest Showman with my mum, doing a 1000-piece jigsaw puzzle, eating too much and visiting the best bookshop in the world (Barter Books in Alnwick, in case you need to know) - so doing all the important stuff, basically.

2018 was a good writing year for me and as a result I've already got 3 new Harlequin Presents/Mills and Boon Modern books written and scheduled for release in 2019... Yay! (Sometimes I even amaze myself?!)

Hired by the sheikh… And expecting the royal heir!


When shy, academic Cat Smith is hired as a researcher by Sheikh Zane Ali Nawari Khan, she’s thrilled—and completely dazzled by their overwhelming chemistry! Cat knows a fling could compromise her professional credibility, but resisting Zane’s sensual caress feels utterly impossible. Until their passionate encounter has lasting consequences… Now carrying the heir to the kingdom means one thing—Cat must become Zane’s queen!

I’ve drawn her into my world… And she’s mine to awaken!

Walking into my casino, Edie Spencer seemed like a spoilt heiress—until she agreed to clear her family’s debts by posing as my temporary mistress. My plan? To use her to expose my business rivals. Yet discovering Edie’s innocence has led to greater temptation than I could have imagined. Our chemistry is spectacular—now I’ll claim Edie for so much more than pleasure!

Contracted As His Cinderella Bride - August 2019
No blurb/cover yet... But here's my teaser trailer:
When London cycle courier Alison Jones delivers a wedding ring to French property billionaire Dominic LeGrand one rain-soaked night in Bloomsbury, they can't keep their hands off each other. It is the beginning of a tumultuous ride that will include the chance to realise her dream of becoming a fashion designer ... If only she can stop herself from falling head over heels in love with her new husband of convenience!!


January 14th: I'll be doing a Take Over Day at The Pink Heart Society's Aspiring Authors Group on Facebook, so if you have questions about writing you want to put to me go join the group!

February 25th: I'll be starting a new run of my 7-week online Writing Romance Course at the Professional Writing Academy... If you want a taster session for the course, check out the week-long free workshop I'm running on the PHS AA group in February on Creating Compelling Characters... Another great reason to join this wonderful FB group for aspiring romance writers... I'll have more details of that on Twitter and FB when I know the dates.

I'm already back at the coal face writing my next Presents, which is going to be a sequel of sorts to my January book - Carrying the Sheikh's Baby. So if you enjoyed Kasia and Kasim from that book, you may enjoy this one, suffice it to say there's going to lots of hot desert sex, some jet-setting in London and the Med, an accidental pregnancy and much more in store for these two! Oh my.

My other writing plans for this year include writing more Presents, hopefully another Rodeo book for Tule - featuring the oldest O'Connell brother, Gabe, who appears in The Rodeo Cowboy's Baby. I'm also working on a new women's fiction novel, whenever I can find the time, about a run-down arthouse cinema in Notting Hill, the plucky young manager who has just inherited half of it after the death of her best friend and mentor...  and the movie-hating Manhattan property developer who has inherited the other half... Wish me luck on that!

I love making plans for the new year, how about you? The only think I have to do now is start making them happen!!

I've been looking for info on this topic for a while. I'm happy this one is so great. Keep up the excellent work. if there is someone who need Fenugreek seeds exporter then try our service.


Well thanks for the information, do not forget to visit my blog too.
Fishing Tips


Amazing Article :) Im extremely affected by your blog.I’m happy that you simply shared this useful info with us.I am quite sure I’ll learn many new stuff right here!
Cold Weather Camping


Thanks for sharing this quality information with us. I really enjoyed reading.
Types of Fishing

This is a really good read for me. Must agree that you are one of the coolest blogger I ever saw. Thanks for posting this useful information. This was just what I was on looking for. I'll come back to this blog for sure!
wholesale rice suppliers

The information in this article is satisfied me.It is really helpful. Thanks for this kind of article. And the information it is very interesting. the fish finders fisher manfamily camping"