Introducing Hot Summer Nights with a Billionaire, my duet with Abby Green... With teaser trailers! 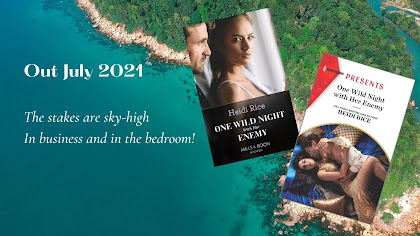 Just wanted to introduce you all to my latest addiction... Making Canva Teaser Trailers! LOL..

And more importantly my new duet with the fabulous Abby Green author!

It's also my first duet with Mills and Boon Queen Abby Green – but hopefully it won't be our last – because Abby also happens to be my very best writing mate... 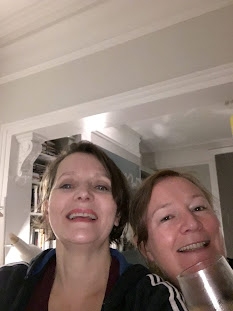 Even though Abby is from Dublin and I'm from London we actually met for the first time in San Francisco (glamorous or what?), when I got nominated for a RITA award (aka: a very prestigious romance writing award given by the Romance Writers of America) for my second book The Mile High Club back in 2008 and I decided to head off to the RWA conference alone. I have to admit when I got to SF I was a bit lost, the conference was actually HUGE and as I couldn't afford to stay at the big conference hotel I was in a tiny pod hotel across the street... And I knew NO ONE! Until Abby made it her mission to befriend me and introduce me around to all the other Harlequin/Mills and Boon authors there.  It wasn't long before we were spending far too much time in the bar together, bonding over writing gossip and margaritas (and basically going to virtually no workshops!). I had an absolute ball – even though I didn't win the RITA (did I mentioned I finalled already?!) I won something much better, an amazing friend to help we through the slings and arrows of my writing life. Whenever I have a panic attack about my latest book, Abby's there at the end of the phone to listen to my moaning and brainstorm my plot, characters, etc until I can unstick myself. And I'm happy to do the same for her when she's freaking out about her word count. We've been on writing retreats together in Ireland and Wales and a road trip to Austin Texas (where she somehow managed to direct us into a military airbase! Fabulous friend, great writer, but can’t read a map as it turns out)... Not to mention shared a room together at a host of other RWA conferences. So when our editors suggested us writing a duet together we just had to do it... Abby came up with the initial idea, two best mates from very different backgrounds - one the daughter of an Irish housekeeper and the other the daughter of a callous British aristocrat. Our girls had bonded as teenagers and always had each other's backs, even though they have become very different women. My heroine, the Brit, Cassandra James, is now a focussed career woman with a top-flight job as the assistant to taciturn British billionaire Zachary Temple and, Abby's girl, Ashling Doyle, is a free-spirited Irish yoga teacher. Add in bad boy US tech billionaire Luke Broussard who Cassie is gonna have to spy on at a society wedding in Frisco for her boss Temple, and you've got the basic idea for the duet - with our girls swapping their ideal hero for the guy they SO shouldn't be matched with... We had a lot of fun – and some angst (hey, that’s our process!) – writing these books, and I discovered it really helps to have a friend you can be straight with when it comes to writing a shared prologue! Especially when you decide the shared prologue was a really stupid idea and you scrap it... I love Abby to bits, and I love these two books... And I can't wait to see what readers make of this duet. I’d even love to do another duet with her, but FYI, next time I'm coming up with the far too vague premise we then have to spend hours on the phone during a pandemic trying to turn into something resembling an actual plot. #justsayin'

So here are the two teaser trailers I've done for our books! Hope you enjoy them as much as I enjoyed making them...

First up: Cassie and Luke's story One Wild Night with Her Enemy

And second in the series: Ashling and Zachary's story The Flaw in His Red-Hot Revenge

The books are out in July and August, so don't miss them.