Fifty Shades of Grey The Movie... Why I loved it!

Ok, hold that thought. Because before I go any further I want to say this is IMHO a critic proof movie. Why? Because the people (mostly women I will admit) who loved the book and who found the characters of billionaire dominant Christian Grey and virginal English lit student Anatasia Steele compelling will be looking for something very different in this movie than those people who didn't read or like the book. I'm not saying the non-fans  and their opinions don't count (after all, some of them may still love this movie!). And if you pay money for a movie you're entitled to enjoy it. And to have an opinion if you don't. But frankly, I'm not really interested in their opinion - and that includes you, snide critic from The New Yorker - and I'm not remotely interested in all the scathing value judgements some people have seen fit to make about those of us that enjoyed the books and/or enjoyed the movie either. Because frankly, life's way too short to have to justify what you enjoy watching/reading/playing etc for your own entertainment (as long as it's legal, obviously).

So back to myself and my fellow romance writer and FSOG fan in that cinema in Islington... Did we enjoy the experience...? Well we had high expectations, and they were (actually quite surprisingly) not disappointed. We were thoroughly entertained.

So why were we so surprised?

Well, this is a romance people (when I say romance here I mean the genre term as opposed to something that is romantic), and the difficulty with bringing a straight romance to the screen (and why so few of them are) is that it's not plot led, the key points of the story go on inside the characters heads - especially if you don't have the quick-fire dialogue supplied by rom-coms. How do you convey that on screen? That was Sam Taylor Johnson's challenge and the challenge for the two leading actors - Jamie Dornan and Dakota Johnson - and they rose to it admirably (no pun intended there, folks)... They took it seriously enough to make the characters live but at the same time not so seriously that it became  heavy or overly dramatic (or dare I say, cheesy). That's a very hard trick to pull off, but they did it because the end result here is a slick, sexy, entertaining, fabulously overblown romantic fantasy, which also manages to be witty and self aware. 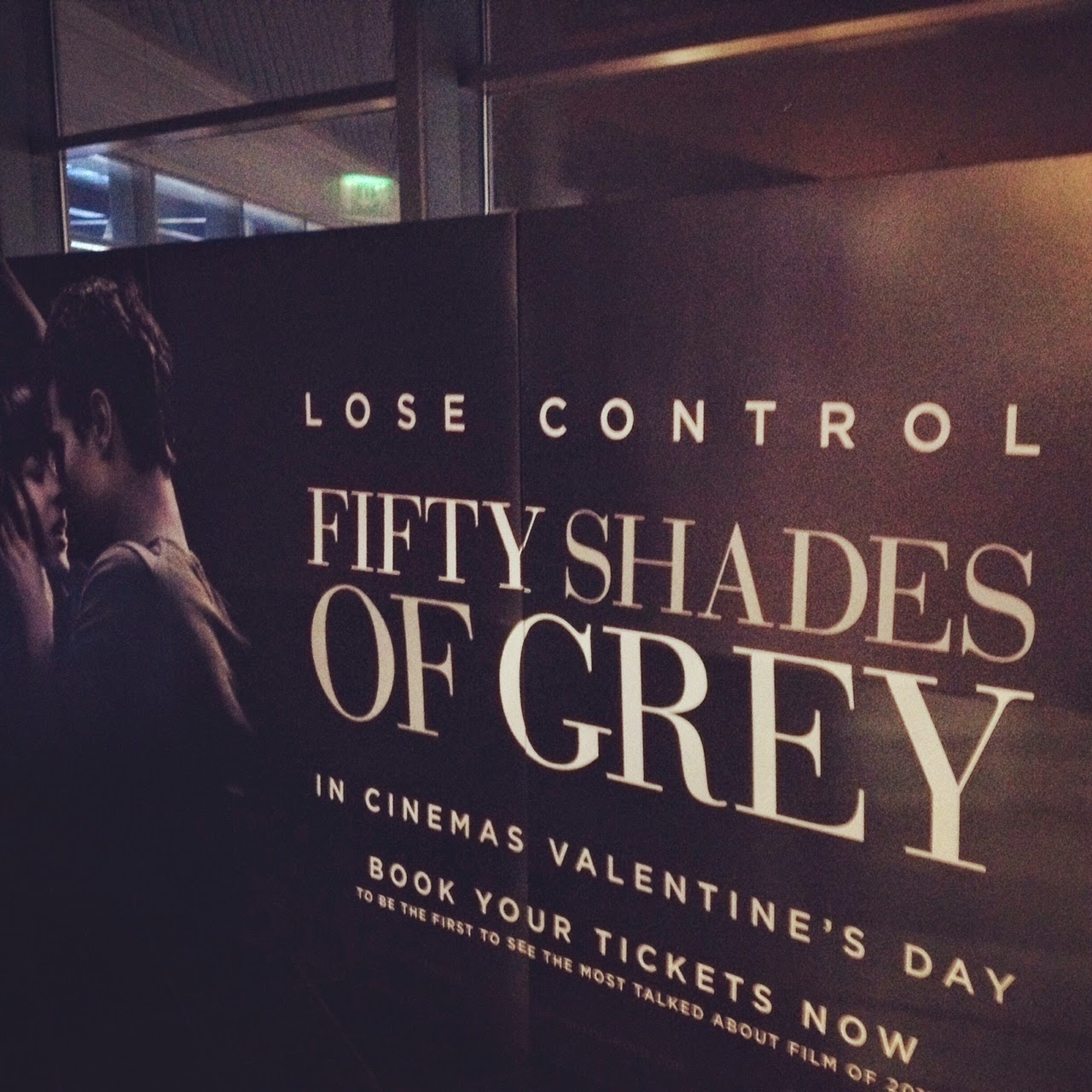 And why were we so entertained?

James's book took these characters more seriously, but really you couldn't do that in a movie - a book is an intimate and personal experience for a reader - a movie is not, because you're viewing it with loads of other herberts, most of whom you don't know from Adam. Luckily, the movie's playfulness not just with the characters but also with the book's iconography admirably help it get over that hump. And explain why there was a round of applause when Christian first appeared and a lot of laughs when he said 'Laters Baby' for the first time...!

But anyway, in both the book and the movie, it's the romance - the journey of Christian and Ana's relationship (not all of which is romantic BTW) that's driving the story. Not the sex. The sex is like the action scenes in a James Bond movie, it's important to the story only in so far as this is where the relationship changes in some way...

That said, this is supposed to be a sexy movie and what I loved was the eroticism and playfulness in the sex scenes. There is one particular scene where Christian spanks Ana, but it's very clear that they are both getting off on the experience. There's also the witty sexually charged scene when they are negotiating the notorious 'contract' - when Dakota's Ana is both naive and bold while Dornan's Christian is both frustrated and captivated.

Not at all playful is the scene at the end of the film.... Again, the actors and the filmmakers got this scene exactly right (for me).. Even though Ana consents beforehand, in fact encourages it, because she is curious to know exactly how far Christian 'wants' to go, and doesn't use her 'safe word' during the incident which would have ended it, there's no doubt that she is a victim here... The scene is dark, it's disturbing, it's not sexy. Christian goes way too far, he hurts and humiliates Ana and Ana confronts him and walks out on him... If this were real would we still consider Christian to be a romantic character? Um no, we wouldn't. But if James Bond were real would we still consider him a hero after he had shot, garrotted, stabbed, blown up, etc a load of living breathing actual people? Oh, but wait a minute... They're NOT real.

We can handle the fact that JB is a mass murderer because we know he is a good guy who has to kill all those people to get that ticking time bomb out of the Houses of Parliament (or whatever)... Just like we can handle what Christian does to Ana because she stands up to him, and because this is going to reveal something to her that will eventually make him much more vulnerable than she is. And if you love romance it's those essential pivotal turning points in a relationship, the moments when your hero or heroine is forced to confront or reveal their greatest fears/or inner conflicts and vulnerabilities that is the vicarious pleasure you seek.

If you don't 'get' that, if that's not something you get vicarious pleasure from, you're probably not going to enjoy this movie the way I did... But if you do, you just might be one of the people clapping at the end with a great big smile on your face thinking how you can't wait to see the next film, instead of yawning... Or cursing, Or running to Facebook to say what a load of exploitative, disturbing crap you thought it all was and how you pity the poor buggers who are too stupid to realise that!

Oh, and there's also a great soundtrack. Beyonce's reworking of Crazy in Love and Haunted capture the movie's glorious guilty pleasure tone perfectly... Not that I felt remotely guilty mind you for enjoying it.
Posted by Heidi Rice at 13:11

So you really liked it then Heidi? I too had noticed that some of the reviews had been written by people that hadn't read the books and weren't very complimentary at all.

It's great to see a positive review of it to be honest.

I had been wondering after reading the bad revews whether some things were better left in my imagination, but you might have swayed me back the other way and you might just have whet my appetite to go and see it now.

Bernie, you must tell me what you thought!! It's not high art, but I thoroughly enjoyed it.